I loved discovering the Gnaoua musicians that who would pop up as we traveled around Morocco. The first time that we met the Gnaoua, the whole rhythm of our group changed. From that first encounter, the trajectory of our journey tilted. The rest, as they say, is history...
Posted by Jelani at 7:33 PM 1 comment:

The Heart of a Stranger 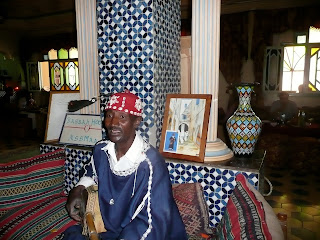 What amazed me most about being in Morocco were the times when we met people who just captured my heart. One extraordinarily hot day, we stopped at a restaurant hear the desert. Standing at the entrance was a Gnaoua man. He stood majestically. When he flashed his toothless smile, he lit up the world. This man seemed familiar, like he could have been an relative or family friend that I remember from my days as a boy in Georgia. As we ate, I heard amazing music and looked to see that the light filled man was responsible. Gnaoua music pulls from melodies and rhythms from the sub-Saharan countries, mixed with the indigenous music of Morocco and Arabic. The fusion of sounds grabs me. Not only was this man a master at mixing the sounds, he also mixed the things he could do at one time. He strummed the African banjo like stringed instrument called a hajhuj, while at the same time, he rattled the little cymbals that were attached to the neck of his instrument. He sang melodies that reminded me of something familiar. Maybe because the melodic progressions can be heard in American Blues. What impressed me the most was when he started spinning the tassel on his fez studded with cowry shells.

I made eye contact with the singer and soon we had a smiling session between us. I went over and made my offering to him. I tried to spin the tassel but just couldn't get the rhythm. He kept saying, "Sudan, Sudan," and I kept responding, "no." I did not know if he was asking me if I was from Sudan or if he was telling me that he was from Sudan. After we left, I learned that he was trying to me me we were related, that he had come from a place from the South. When we finally left, my new found relative bowed his head and did a double gesture with his hands. Next to his heart, he placed his hands on top of each other and then flipped them. Youness told me that he was honoring me by saying that he submitted his heart to me. How cool was that! How cool would it be if we always saw some kind of light in the eyes of people we met and we submitted our hearts to the hearts of strangers. That day, I felt, maybe for only a short time, that I had passed through the limitations of time and space and hitch to the heart of a stranger.

A King in Fez

The crossroads of cultural diversity, both historically and currently, struck me in Morocco. The time where this recognition struck me the most happened one night in a little disco in Fez. That night marked a turning point for me on our five-week peregrination. Some of us decided to go dancing after being together for a couple of weeks at that point. There is nothing like watching the people that you know, or think you know, finally let their hair down on the dance floor. For me, seeing these pedagogues turn into terpsichoreans was a sight to behold, and a joyous one, too!

When we first entered the disco, the dance floor was empty except for the reflections on the floor from the giant disco ball above flashing cascading lights across the floor. Being the bold Americans that we were, the empty floor was quickly filled with our bopping, twisting and gyrating bodies. When we started dancing, we captivated an audience. Like most places around the world where I’ve traveled, Americans are easily recognized. The locals, excited to know who we were, joined and danced with us. Throughout the night, they would imitate our dance moves and thrill their companions as well as astonish themselves their own newly found choreography. As the night progressed, the passing of Michael Jackson pressed heavy on the hearts of some of my colleagues. Periodically, someone in the group was deployed to the DJ booth with Michael Jackson requests. The DJ resisted. All was not lost. We had a great time dancing, anyway.

Towards the end of the night, the Moroccans would get bolder and bolder about talking to us. Some of the “women of the night” would stop by to give us a hug and joyous say, “I love you.” What a welcoming energy! The disco consisted of two rooms. We situated ourselves around a table in the first room. During the night, I ventured a few times into the other room, which seemed to be the home base of some of the people from other parts of Africa. As Last Call approached, several of the Moroccans gave us their business cards and asked us to call on them the following day. It was thrilling to be so welcomed by the people.

Finally! The DJ honored the requests for Michael Jackson. Almost like choreography, everyone in the two rooms spontaneously gathered in a giant circle in the main room. The Moroccans, all the people from the other countries, the “women of the night” and the American teachers, all joined hands. A brilliant spotlight beamed from the ceiling into the center of the circle and onto the floor. That light became Michael, the King of Pop. People would call out to the light on the floor, “Michael, Michael! We love you Michael!” Several of the Moroccans would step into the light and attempt the Moon Walk or other moves of the King. That light was alive and real. I can’t even remember the songs that played but I remember dropping my head and sobbing. I was overwhelmed with joy, sadness and surprise. What came rushing to my mind were all the songs I had sung and danced to as a little boy in Georgia. Michael Jackson was everything to me. Over the years, I had forgotten the spirit of “We Are the World” and “Heal the World.” That night I SAW that spirit and I remembered. That the songs of a gentle little man could bring people together, from so many places, amazed me. The sweet message in the music from the King created a space that few others have achieved, certainly not some of our “leaders” in the world today or of any time.

After that night, I often thought about the cultural crossings in Morocco. Historically, Morocco served as one of the great crossroads and doorways of the world. From the many intersections of languages, music, foods, ethnic groups, and religions, so much can be traced back through European and American history. That night in that little disco, when the King came alive, I got to bear witness to one way that cultural intersections work. I will always give thanks to that moment in time where music brought so many people together. I should not have been surprised because in the days before that night, I met some people on the street who knew I was American who would simply say, “Michael” and give a sweet nod. I also give thanks that night to Shondale, Azeb, Carol, Sylvia, Maceo, Youness, Jenny, Jennifer, and Angela for dancing with me.